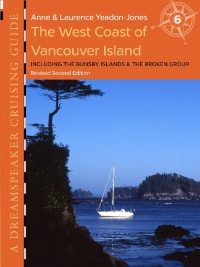 Including the Bunsby Islands & the Broken Group

The west coast is carved into five principal sounds, each with its own flavour and culture. Happily, the distances between the sounds’ protected inlets are relatively short, allowing cruising boaters to spend evenings anchored in a sheltered cove or bay. With its rock-studded shoreline, miles of sandy beaches and diverse wildlife, this coast is awe-inspiring. Cruising here demands a keen respect for the open Pacific Ocean, diligent navigation and extra care timing tides and weather; this is one of the Pacific Northwest’s most challenging and thrilling adventures.