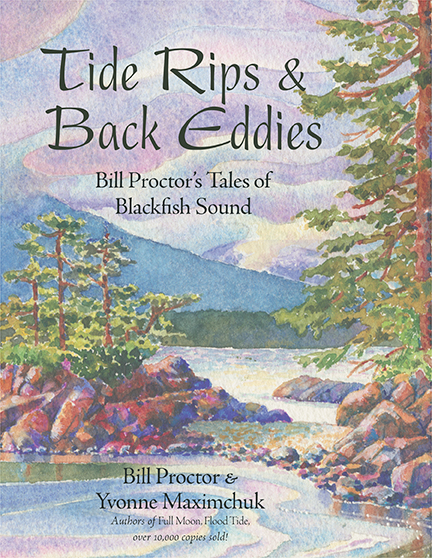 Billy Proctor, resident legend of Echo Bay, BC, recounts almost a century’s worth of experience with this collection of stories, memories and local knowledge of the central BC coast region around Blackfish Sound. Situated in the beautiful Broughton Archipelago between northern Vancouver Island and the mainland coast, this region boasts a history and culture as engaging as its stunning locale—and nobody tells its story quite like Proctor.

A lifelong fisherman, trapper, logger and, in later life, author, Proctor learned from both the indigenous Kwakwaka’wakw people and the settlers who came to live in Blackfish Sound. Along with his entertaining tales of the surrounding communities, Proctor also discusses the ingenious technology necessary to both fishing and everyday survival. Covering the natural and domestic history of the area and everything in between—from recollections of old-time fishermen to Billy’s own stories of sasquatches and other strange things—Tide Rips and Back Eddies is a riveting and deeply moving account of a long and uniquely coastal life.

Writing collaborator Yvonne Maximchuk’s drawings illustrate Proctor’s personal anecdotes as well as carefully detail an eclectic array of interesting items collected by Proctor throughout his lifetime for his personal museum. Tide Rips and Back Eddies is not only a historical archive of immeasurable significance, it is a fascinating read for those interested in the Blackfish Sound region as well as an honest and whimsical look into the life and lessons learned by a local legend.